We were lucky enough to be invited to the preview on 26th January 2016 of the ‘Painting the Modern Garden: Monet to Matisse’ exhibition at the Royal Academy. It is showing works of artists in that period of time painting gardens.

We arrived on time and did the clever thing. We walked straight through the exhibition to the end where the huge triptych of Monet’s that have never been hung together since first painted were situated. We walked in and for a few minutes we were the only two people there.

Bliss to be surrounded by the paintings in silence.

Monet at Giverny and us alone in the room to take this photo !

Then we walked back through the show. Many of the Monet’s look great from a distance and quite ugly close up. I like that. I like that something ugly transforms to something beautiful depending on where it is seen.

There was a lovely Matisse, Palm Leaf, Tangier 1912. There were extraordinary Kandiinskys. There were three Paul Klee’s we really fancied having on our walls!  There was a modest and lovely Pissaro of a vegetable garden. And there was an intriguing Maurice Denis of nuns in a garden, a little like a Paradise Garden of Persia. Very unusually in colour and form. Lovely.

There were some extraordinary paintings that I did not like of the foreground, but the effect of the light, as if it was from a backlit theatrical set, was wonderful. But I am not a great fan of most impressionism anymore and I never did like Renoir.

The whole felt a bit overwhelming, a bit of a large bouquet with a few rare and precious blooms.

For the Monet it will be a sell out show, so I am very grateful to have seen it in peace. A moment of serenity in a place of beauty. That was his intention after all the bloodshed of the First World War and that is his achievement. 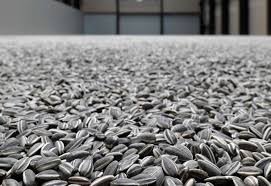 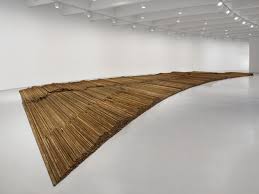