Guggenheim Museum, New York is a museum known as much for its architect, Frank Lloyd Wright as for the artists it displays. It was originally conceived to display Guggenheim’s collection of Kandinsky’s works. Nowadays it has many and varied exhibits to see.

It is a difficult and challenging space to display works in as it ascends from the central atrium in a spiral opening up as you ascend. It is a beautiful space, with many references to spiritual ideas, but due to its curvature and openness, you can see across the spiral to all the spaces, hard to hang works of art in.

Not for On Kawara. It was as if the space was designed for him, Unfortunately, like Mr Guggenheim and Mr Lloyd Wright, he died before his show opened. But he knew it was happening. I don’t know if that is comfort or irony. 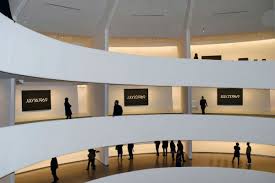 His pieces are so (deceptively) simple you would pass one by if it was by itself. They are like markers, mainly grey with white writing, like a tombstone, but in landscape rather than portrait shape. They have the date they were painted. Just that. And because they are just that they are also everything.

He painted a date like that each day, every day. If it was not completed by midnight he destroyed it. Although that is not the apparent part of the work, I love the diligence, the attention, the mindfulness. They place him, and you the viewer, in the here and now, but also in the then and there. As the viewer, you complete the picture of course as you fill in what you were doing that day in your mind. They open that conversation of remembrance at the same time as being present, realising the gift of every day.

His other works are equally magnificent. His postcards, his collections and his messages. 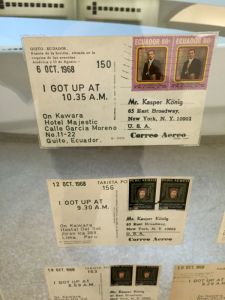 On Kawara: I got up

I had to buy the t-shirt ‘I am still alive’. How perfect an expression.

Perfect art in the perfect place for it.

Wherever you are Mr On Kawara; thank you. You made my day.