I find the American system of private funding a challenge. People fund things, philanthropy and charities, in return for something. They feel better about themselves. they get to meet similar minded people, they get an invite to a party, whatever it is. I don’t believe we are truly altruistic. I think we want pay-back. So it was with amazement then that I went to Dia at Beacon, a former biscuit factory up the Hudson river (about 1.5 hours on the train).  A huge building kept simple, warm and clean all by donations, by philanthropy.

And then  the wow of what was inside.

As we entered we turned left, I tend to turn left in shows so I sometimes get is wrong if the curator starts on the right. But turning left here led us into the most amazing space (ok, they all are amazing at Dia). A room of Dan Flavin’s. Just Dan Flavins in this enormous space. And what Dan Flavin’s they were. One was a long screen, like a series of sliding doors in white, red and blue, like the American flag, but doors. Wonderful. There is a companion piece in his friend’s Donald Judd’s New York home Spring Street, which we also visited a few days later.

From the Flavin’s we went in to see the Carl Andre, known, I suppose for his bricks at the Tate many years ago. We had seen a show of his in Margate UK, but this was on another scale. Room after room of them. Again, wonderful.

Then the Richard Serra’s. In one small room a vast metal boat-like structure. Perfect curating. It would be obvious to place it in a large room, but instead, in this cramped space you squeeze by it and you and it feel vulnerable. In the basement a whole load more Serra’s, more maze-like and still massive.

But the real reveal for me were two artists I did not really know well.

Agnes Martin. I had seen a couple of works of hers, but at Dia you get a couple of large rooms. They are stunningly beautiful. Their lightness of touch makes them almost not there.

And then the works that completely blew me away.

Fred Sandbach in the photos I saw of him looks like he fits in that gang. But his work defies that.

He uses such a tender material, twine, almost like knitting yarn. It can be stretched and you can see the parts of the yarn like tendrils escaping from the twist, decaying at the moment of creation. 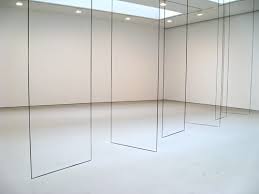 His work defines space with geometric precision. When looking at the space it is as if there is a double mirror reflecting each side, but you can step carefully through. They invite the viewer to complete the space.

I am still in rapture seeing them.

I am still in rapture that Dia exists and am grateful to all the donators, whatever their motives, as their money has brought such beauty for all of us to see.