Skip to content
A series of concerts at the Royal Festival Hall on the theme of:

Belief and Beyond Belief

The belief in something greater than ourselves has preoccupied humanity for centuries. In this festival of music inspired by spiritual belief, we attempt to lay open the grandeur, enigma and conflict in our search for, and understanding of, the divine.
VLADIMIR JUROWSKI, PRINCIPAL CONDUCTOR AND ARTISTIC ADVISOR, LONDON PHILHARMONIC ORCHESTRA

I didn’t know the theme of the concert when I went to it. I like Steve Reich and was just up for the moment. Of course, midweek, you start to think about late nights and getting up for work the next day.

Well, if this is sacrifice, it was worth it!

This concert was as if I had been dropped into holiness. Sounds of heaven.

It started with Gavin Bryars- The Sinking of the Titanic- with voices of survivors. Old voices never to be heard again, immortalised. Beautifully performed by members of the Philharmonic Orchestra.

They went on to play Gavin Bryars- Jesus’ Blood Never Failed Me Yet sung by a tramp in the Elephant and Castle. The respect given to this made it a holy act, recognising the human in the other.

Even at the end of each piece the audience remained in silence to give space to the work. And then applause. And then Gavin Bryars got out of his seat just in front of us and took a bow. Oh! What a place to be.

Now I am never sure about going to concerts. With things like Spotify, I can enjoy music in the peace and privacy of my home without people coughing or nodding off to sleep next to me. I can understand why the man next to me fell asleep. Commuting to work, working, coming to an evening concert in the middle of the week and then getting home and to bed and back to work- yes, sleep comes easy.

But last night I really got it. Being there.

The Steve Reich work ‘For 18 musicians’ was just that. Eighteen musicians of incredible ability, concentration and fitness to have the stamina to play such a deceptive piece, sounding so simple, but so complex. It was choreographed with singers, pianists and percussionists moving from one instrument to the next with the woodwind giving the breath of life to the whole. 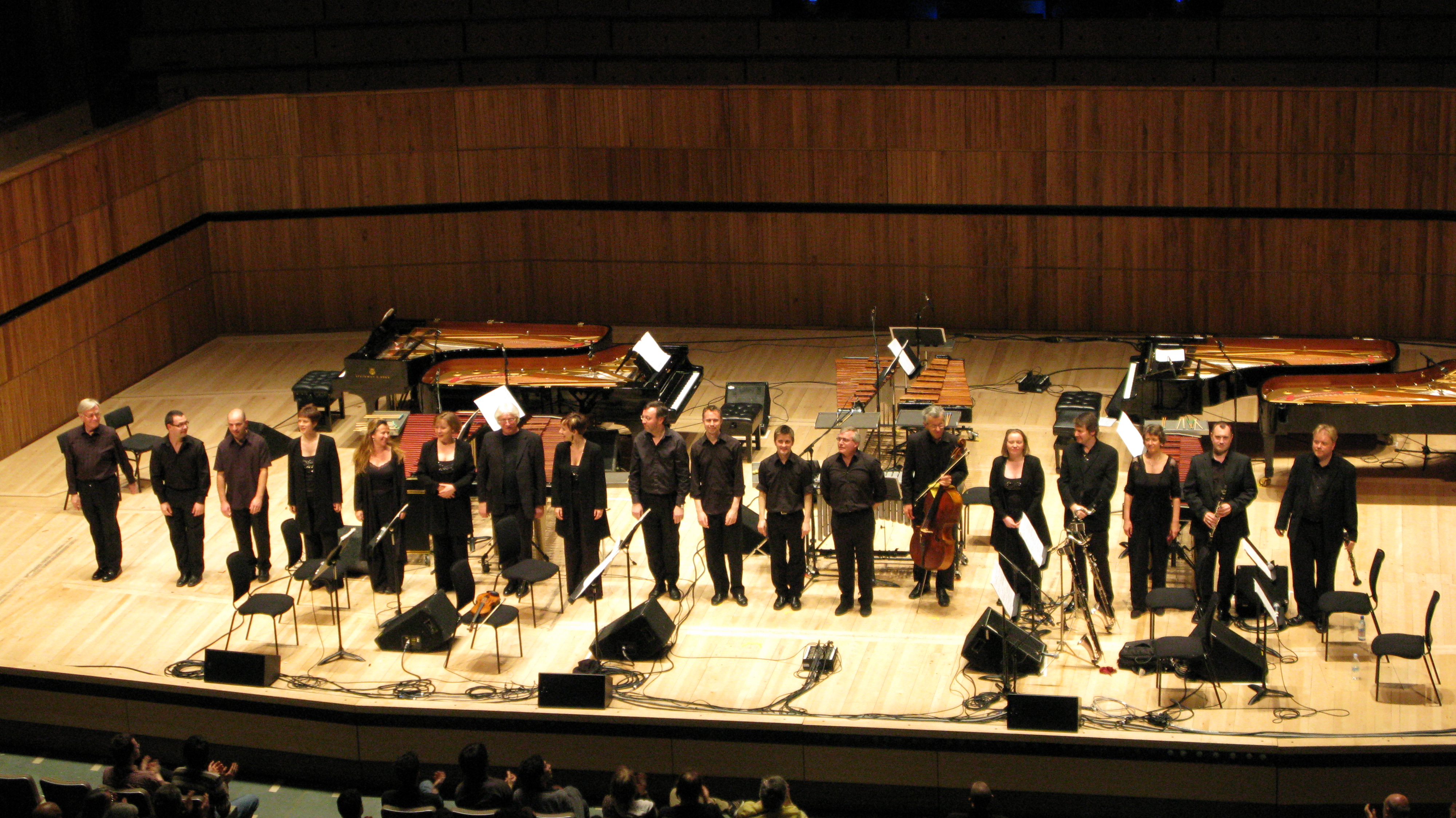 We came out buzzing. The people we had sat opposite in the cafe in polite British silence before the concert, rocked up also full of enthusiasm, as if close friends, so moved by the event. I said, as she did at the same moment, how lucky I was to have been alive for this, to have been there to hear and see it.

And now I am listening at work on Spotify. I prefer the live version, but I am still moved. And I can see them all, performing with such care, such concentration, such ability and perfection. A holy act.

That in the middle of so much stupidity by so many humans there are some humans doing this. At moments like this I understand the claim that we humans really are in the image and likeness of God and that, if we all try, we are all capable of imitating holiness.

Such respect for sound, for art and for the ‘other’.