Venice.  La Serenissima. A city so beautiful that adding art to it may seem superfluous. But here comes the Venice Biennale. Lots to see on such a stunning backdrop;  quite a competition for your attention. However, the Venice Biennale is now at it’s 56th show and has therefore had about 112 years of practice of attention grabbing art.

So here is my view:

1)  The Pavilions in the  Giardini

Many nations have pavilions that they pay for and then select curators or artists to fill with works, some are themed and some are Art!

Well the English are, as I have rather gone off the Scots since the election.

In the British pavilion Sarah Lucas turned up the volume in many senses. Her pavilion was a huge colour field in yellow and at the inauguration, instead of another bunch of long, boring speeches, she had two brilliant musicians pump up the volume and rock it. Fab.

The USA pavilion had the fantastic Joan Jonas, I am a big fan and it was great to see a long line of people waiting to get in to such a totally and completely conceived and realised show, 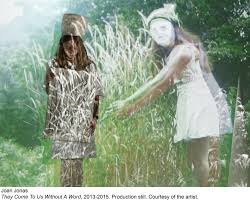 The Belgian pavilion had some great stuff; one of my favourite pavilions. Merged art and ideas.

The Danish pavilion was spare and lovely.

There is also a Giardini group show which had some great works including the excellent Jeremy Deller being very political.

Then over to the Arsanale. This is a huge place with many artists being chosen from around the world by the curator of the event, which changes each time.

The theme of the show this time was based on Paul Klee’s Angel of History painting and Gershom Sholem’s poem (who they managed to call Gerhardt Sholem !). But this theme been done before in 2006 at the Arnolfini’s opening show, which is a bit naughty.

But some brilliant work:

Adel Abdessad with a fabulous performance piece and the result of the work.

Sonia Boyd with a film of a performance at the Victoria and Albert Museum in London which was so alive, current, engaging and modern but with undercurrents of identity and politics. Great stuff.

Theaster Gates film of the destruction of a church in Chicago. You needed to know the context to see it and then you can see the layers.

Chris Ofili, wonderful paintings, especially the Green one. I walked in and almost out at first as they were very overwhelming. But when the room emptied I went back and fell in love. Not at all my taste, but I ended up just wanting to live in the room!  Total convert. Loved them.

Chris Ofili Venice 2015- this image doesn’t do it justice!

Christian Bottomski film of wheat sheaves and bells on the sea shore, really simple and really everything

Chantal Akerman film, which was fantastic as film and as installation. It made you walk among the screens and it was all sped up with a sort of road movie feel, but with no people, just landscape.  I loved it.

Some duds and lack of credits including a work called the Botany of Desire. Now I know the book of that title and the book is much better than the art work of the same name.

3 Then into the best in showsssss!

My favourites were not in the official biennale. They were in other galleries, or Palazzos, which are pretty amazing places to show art.

‘Slip of the Tongue’  with some brilliant pieces by Nairy Baghramian, Nancy Spero, Henrik Olesons (nails) and Petrit Halilay. Curated by Dan Vo who did the Danish pavilion too.

Jimmie Durham: this was almost best in show as I was totally absorbed and could have stayed all day/week. It is in a beautiful setting which helps, but he really used that and there is a wonderful book that accompanies the work- worth reading. The show is at the Fondazione Furla which is worth going to anyway, but with his work there, spend the day. Perfect use of some Morano glass.Really wonderful work

We were about to go back to visit the Jimmie Durham as it was so wonderful, but it was closed on the Monday so we went to the Fortuny Museum instead to see a show there, Pro Portio. What a place and what a show . Some amazing works including Marina Abramovich (sound work), Sol le Witt, Agnes Martin, Carl Andre and Fred Sandback, juxtaposed with the odd Botticelli and Durher anatomy books! Wow, The Italians are not precious about their wonderful art collections. Totally wonderful show and place. Brilliant curation. I could live there too! So it ended getting my Best in Show (a bit like Crufts I guess). I loved all the juxtapositions of ancient and modern at both this and the Jimmie Durham shows.

Also, I should mention the ‘Venetian Blind’s, a series of concerts by bands led by artists in the amazing Palazzo Grassi  with free cocktails to cheer the spirits. Martin Creed played- I shall ignore the Scottish bit and claim him for good old Blighty! Fab.