2014 was a difficult year and keeping going was the main thing. As the saying goes, ‘when you are going through hell, keep going’. So it was a while ago that I went to see the wonderful Jon Thompson’s show at Anthony Reynolds Gallery in London.

Jon Thompson is no youngster and when he makes something it is the thing itself imbued with years of both knowledge and experience. His Toronto Cycle, almost music for the eyes, contains a group of works referencing famous painters, for example Van Gogh. VG1 and VG2 are works that reference Van Gogh early work (1) and later work (2). Interestingly, the later work has the brighter more vibrant colours. What Thompson has done is analyse the colours in Van Gogh’s work and the proportions they are used in and then made his work using those colours in those proportions. He has done similar works with Gaugin’s palette of colours. Vibrant, Melodic. 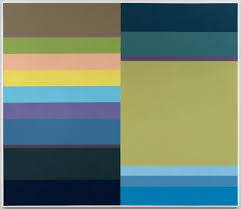 I think they are stunning. That he has made the horizontal (as in say Mark Rothko) look also vertical (as in a Barnett Newman ‘zip’) is brilliant. That he has divided the two halves like tablets of stone, commandments of colour, is inspired. This is the work of an artist.

His latest works contained some blinding colours, oranges that almost fluoresced, blues that illuminated the space. My particular favourite was a deceptively simple  green cross of colour.

I love deceptively simple. I am deeply suspicious of making something that should be simple over-complicated.  I think that shows a lack of real understanding and basic communication needs, masked by jargon and processes.

Thompson strips things back like a revelation. Not only do you see his work, you can hear and feel it. Magic.