Just back from Margate, a coastal town in the UK with a wonderful art centre, The Turner Centre. They put on some brilliant shows. Right now, they have on a show of Piet Mondrian’s work (Liverpool Tate also have a show of his later work for which he is more famous). In the Turner show you see the progress of the artist from his early work to the work that he is famous for and that features in the Liverpool show.

We managed to walk through the show backwards. I seem to do that a lot, turning the wrong way in the gallery. So we went back in time and then retraced forward in time. It was amazing. I say this as a big fan of Mondrian’s later work. I have loved it since I was a teenager. I can’t say why; it just has a really pure feeling about it. It is it. I like things that are it rather than things that are about it.

So here is this man who tries out different ideas- he’s very good at each thing he tries.. He tries Impressionism, very nice and sellable (he needs to eat). He tries Pointilism, Fauvism, Cubism. He works his way through the ism’s of the early 20th Century art movements. And then he tries Mondrian-ism.

It is fascinating to see the change. He starts painting these large flat plains of colour in a recognisable landscape, but more backlit than front lit as in the Impressionists. The Impressionists are interested in how things look under light. He is interested in light and colours. Then suddenly you get a red and blue windmill. And the next year a checkerboard. And one year later you get Mondrian, full blown and in his stride. By then he is about 48 years old. How wonderful, still trying, still finding himself and his ideas.

I’m a scientist and I love contemporary art. For me it is an experiment in a studio. And here are some results. Beautiful, aesthetic, complex, deceptively simple: 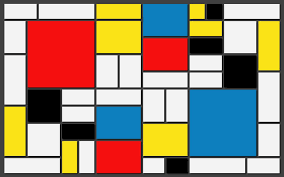 And even less and more: 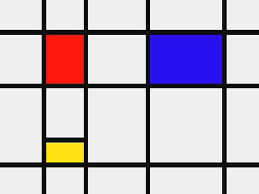 These are the results of a middle-aged man who has experimented all his life. He has dared to leave the safety of the known; the tried and tested. Seldom do we have the experience or ability to create something new.
Like any great science result, I wish I had made this.
Advertisement